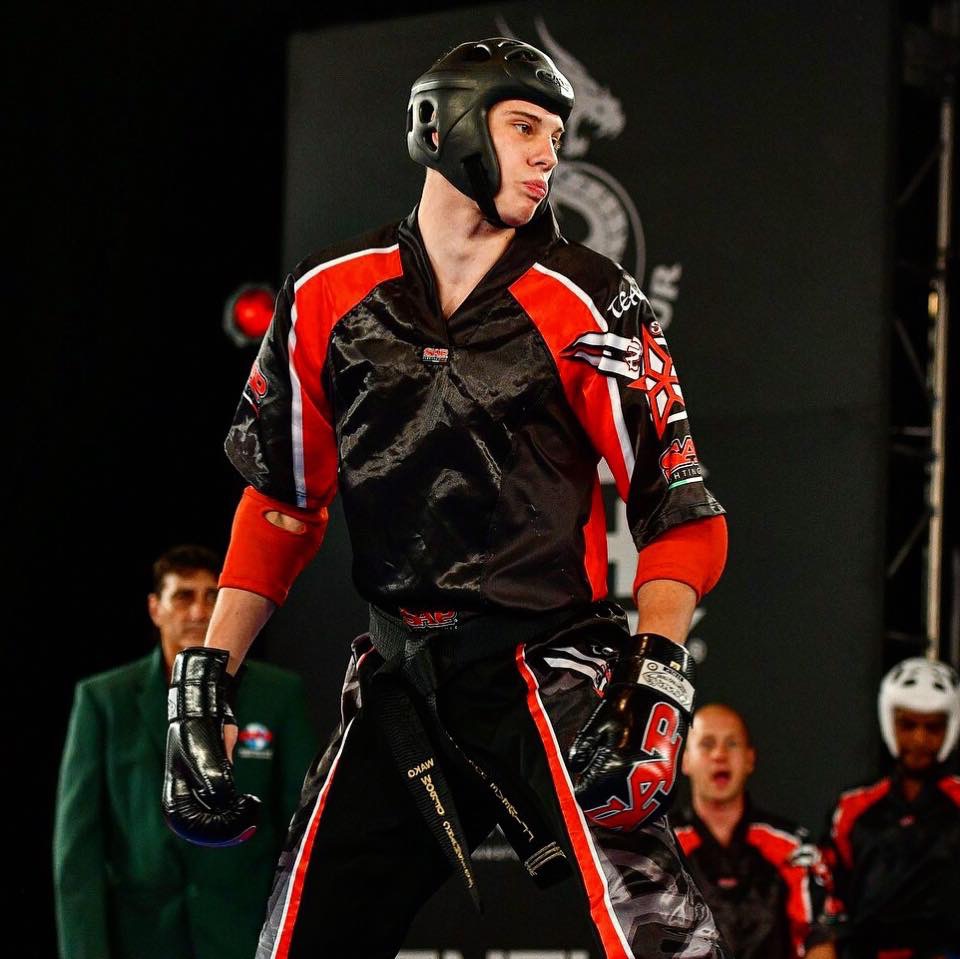 This is a new feature on the Wolfpack blog where we catch up with world class fighters and get their insight into the competitive world of kickboxing. Our first fighter features Elijah Everill, who is arguably Great Britain’s most in form fighter, and also a keen friend of Wolfpack.

KPB: “So Elijah, when did you start training and what did you fall in love with early on?”

EE: “I started training when I was 4 years old – I always wanted to be like the one of the Ninja Turtles or Power Rangers that I used to watch all the time on tv. That’s what got me started. I’ve always loved fighting ever since I can remember, even if it was just play fighting as a kid around the house, I absolutely loved it. Then when I started doing martial arts, learning proper techniques and practicing actual drills, that’s when I really fell in love with it and I knew it was my passion. Not once looking back as a child did I ever think “this isn’t really for me” or “I’m thinking about quitting”, I never went through that stage, ever. Martial arts really became my life and it did so very quickly. I feel very lucky to have found something I love doing from such an early age.”

KPB: “Your achievements are endless… what do you regard as some of your biggest?”

EE: “I currently have 11 WAKO world titles and 5 WAKO European titles in a mix of Cadet, Junior and Senior categories across all styles: points, light contact, kick light and team events. I’ve also won every other major WAKO tournament numerous times over. This is something that I’m really proud of. However there are certain moments in my career so far that stand out to me and are the most meaningful due to the circumstances.

The first one would be when I won the Senior Irish Open -57 light contact division, I was 14 years old fighting against grown men and also a weight category below (-52kg as I was an old cadet) I even got the chance to fight on the night of champions show in the ring, it gave me such a buzz and I’ll never forget the feeling when I won, it was a back and fourth war which to this day is probably one of my favourite fights that I’ve ever had. Another one was when I won the European championships in Spain 2015. I was fighting 3 categories that week, point fighting, light contact and kick light and within my first fight of the championships, I broke my ankle. The next day, it was black and blue and I was struggling to walk never mind, fight. But anyway, I continued throughout the competition and fought on another 11 times before winning a gold medal, definitely a rollercoaster of a week, believe me, but I’m very proud of myself due to the mental toughness and heart that I showed during the event to push through the pain and keep fighting on.

KPB: “You obviously excel in a magnitude of styles; what’s your favourite?”

EE: “I don’t have a favourite style, I just love to compete so it doesn’t matter the discipline – I like them all equally.”

KPB: “Who do you consider the best kickboxers in the UK right now, favourite European and American fighter and lastly your stand-out youth?”

EE: “It’s difficult to pick out the best kick boxers in the UK because there is such a wide variety of talent out there across all disciplines and associations. Growing up my favourite European fighter was always Grillo, I loved his mentality, his ferocious blitzing speed and the passion that he brought onto the mat. As for Americans, the All Star team, Ray, Jack, Robbie (who is Canadian) in particular. Crazy to think that I’m actually apart of that team now having idolised those guys for so many years as a kid. And of course I can’t leave out Jadi from that list, another amazing fighter who is very knowledgeable both inside and outside of the mat. As for talented youth, I wouldn’t know where to start, I’m both very happy and excited about the future of kickboxing here in GB, it’s looking to be very bright with all these awesome kids coming through right from younger cadets all the way up to juniors.”

KPB: “With that in mind do you have any words of wisdom for the younger generation who aspire to emulate your achievements?”

EE: “My advice would be first of all to make a decision on what you want to do in the sport, set goals, challenges and targets to aim for. Once you know what you want, stop at nothing to get it, do whatever it takes, whether that be travelling thousands of miles up and down the country to train, earning and spending your own money to get to tournaments, running miles on Christmas, birthdays, holidays etc. Me and my parents did all that for years and continue to sacrifice to this day. Nobody is ever going to give you anything on a plate, you have to go out there and take what’s yours and be willing to outwork absolutely everybody. As the saying goes,
“when you want to succeed as bad as you wanna breathe, then you’ll be successful”.”

KPB: “For someone who has won so much what’s left for you goal-wise and what keeps you motivated?”

EE: “I will never settle, there’s always more to achieve no matter how much you think you have done. Right now, my goal is to win all the open weights and collect as many grand championships as possible. I also want to win all the big events over in the US because I believe that if you can win on both continents, you can truly say you are one of the best in the world. Not many have done it and I want to be one of the few, so it’s a challenge that really motivates me. Then when my fighting days are over I want to be known as one of the best to ever compete in this sport.”

KPB: “Lastly when will you be visiting us again in Edinburgh?”

EE: “Hopefully very soon once I can figure out a free date, always love training with you guys and being able to train with such a like minded, extremely dedicated athlete and champion in Natasha, is always a pleasure.”

Thank you Elijah! It was great catching up with you and to get such a great insight into your world. We look forward to your visit and always know our students will benefit from your knowledge.